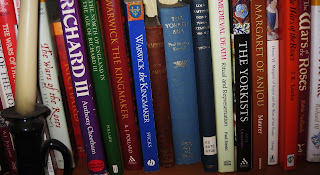 Struggling today. I managed to get to the end of my novel, Yay!!! But now I'm trying to write my synopsis. It seems such an enormous task, summarizing 414,000 words into a few pages.
I've started with a framework of chapters and scene headings and then I'm filling in a few lines about each scene. Yes, I know it would have been so much easier if I'd done this at the start, but please bear in mind I started this about three years ago and I've learned an awful lot since then! not least a bit about planning.
It would also have been a bit easier if I'd picked a smaller canvas - the Wars of the Roses is massive -and I'm only writing about 1469-1471! Still that gives me a lot of scope for a sequel - and a prequel too!!! Actually I think that's part of the problem; because I've made it to the end, part of my brain has decided it wants to think about the next book (I blame Will Hastings), so focusing back at the beginning again is proving really difficult. I'll let you know how I get on!
Posted by Su_H at 03:21 3 comments: 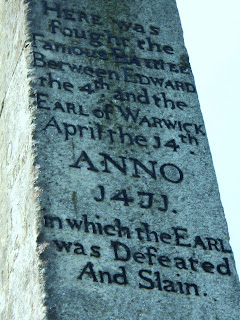 Today is about a final battle in more ways than one - I'm trying hard now to finish my rewrite by the end of the year and I still have about 150 pages to go!! So that's final battle number one. Also I'm coming up to the Battle of Barnet - yes I know Tewkesbury came after it - and of course Fauconberg's rebellion (these Nevilles, hey!) but Barnet really was the death of the Lancastrian cause and I'm feeling very emotional about it! Sources vary as to the size of the forces but Warwick probably commanded between 13,000 and 15,000 men while Edward had between 10,000 and 13,000 men. All Warwick's machincations, all that effort and it all comes down to a slugging match in the fog!!! And in this I've taken a controversial stance though it is the official view of the Barnet Museum. Fiona Jones writes that it isn't the experienced soldier and commander Will Hastings who loses his line to the rampaging Earl of Oxford, its a young man in his first battle command - Richard Duke of Gloucester. As Fiona says "The Great Chronicle of London states that Oxford routed Gloucester and the Arrivall says the Lancastrian right wing routed the Yorkist left wing. There is no other contemporary evidence for other Yorkist deployments." This also fits with Edward then keeping the same successful battle order for Tewkesbury where we know Hastings was on the right and Gloucester on the left. Buy almost any book on the Battle of Barnet (including the usually accurate Osprey series) and Tewkesbury and it has Hastings being routed on the left and then Edward switching them round for Tewkesbury, which never made sense to me. I think he stuck with the winning battle line-up from Barnet and so does Barnet Museum.

Reference: The Battle of Barnet by Fiona Jones published by Barnet and District Local History Society.
Posted by Su_H at 05:42 6 comments:

Just added a slideshow to the TFQ website and thought I would add it here as well. The pics are from a visit I made to the Tower of London - the site of Will Hastings's murder by Richard III and a visit to Will's chantry chapel and tomb at St George's Chapel, Windsor Castle. The whole experience was very moving - plenty of situational writing which hopefully will add atmosphere when I come to write it for real. http://picasaweb.google.com/Su.Harrison123/TowerOfLondonAndWindsorCastle2008#slideshow/5280457424702610962
Posted by Su_H at 11:20 4 comments: 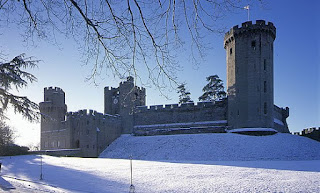 Now you are going to think I am obsessed with the Earl of Warwick (not that I'm saying I'm not) because that is where I have been this weekend - to his magnificent castle of Warwick! Went to one of the 'Kingmaker Feasts' Christmas banquets and decided to go in full 15th century gear - so our end of the table was totally WOTR authentic! The atmosphere was obviously a little more jubilant than the real night before the march south to meet Edward in battle I'm certain, but as we walked through the candlelit 'preparations' exhibition it was easy to let your imagination fly back 500 years or so and think what it really was like. The number of people involved in the preparations must have been staggering; just the logistics of putting that many men in the field in an age without our electronic gadgets is frightening. The more I learn about Warwick the more I'm impressed by him and what he was able to do; pirate, politician, soldier a man who made and unmade kings!
Posted by Su_H at 06:45 No comments:

Ooooo I am so pleased with that banner!
It is a photograph of a letter written by the Earl of Warwick to Henry Vernon, a Derbyshire retainer of Clarence's asking for aid against Edward IV before the Battle of Barnet in 1471.
It translates:
To Henry Vernon.
Right Trusty and Wellbeloved I grete you well, and desire and heartily pray you that, in asmuch as yonder man Edward, the king our sovereign lord's great enemy, rebel and traitor is now late arrived in the north parts of this land, and coming fast on southwardaccompanied with Flemings, Easterlings and Danes, not exceeding the number of all that ever he hath of 2000 persons, nor the country as he cometh nothing falling to him, ye will therefore incontinent and forthwith after the sight hereof, dispose you towards me at Coventry, with as many people defensibly arrayed as ye can readily make, and that ye be with me there in all haste possible, as my very singular trust is in you and I may do thing to your weal or worship hereafter.
And God keep you. Written at Warwick the 25th day of March.
Henry I pray you fail not now as ever I may do for you.
R Warrewyk.
Written by a scribe, the postscript was added by Warwick in his own hand. But the personal touch did not work - Vernon did not come to help him. 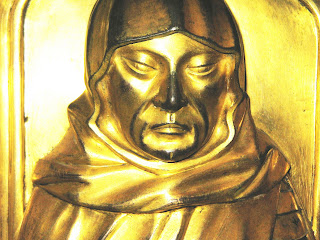 I am currently writing a novel set in the late fifteenth century, in the wars of the roses (WOTR). I have been writing for ~3 years and am on my third draft (is that a good thing?). The book is approx 400,000 words and is actually getting shorter as I edit (definitely a good thing - why did I need those adjectives anyway?). I just hope I have done justice to one of my protaganists, Richard Neville Earl of Warwick and Salisbury, you probably know him as The Kingmaker.
Posted by Su_H at 13:58 No comments: