Spent yesterday with Towton Battlefield Society and the Frei Compagnie at the Diocese of York event at this lovely church. The theme of the day was Sheriff Hutton's connection to Richard III and guest speakers were Helen Cox and Prof AJ Pollard. 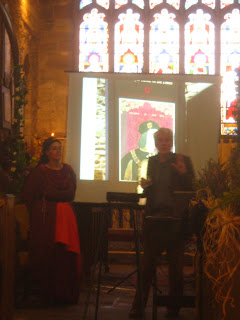 Sheriff Hutton had been a Neville castle used as a stopover by Warwick amongst others when on his way to York. After Warwick's death at the Battle of Barnet in 1471 Richard was given his northern estates by Royal Decree.This was welcomed by the locals as it prevented them from receiving any punishment for supporting Warwick's treason vs Edward IV. Approximately 20 years later Sheriff Hutton was estimated to be worth ~£600 per annum in income which is pretty sizeable (Middleham at the same time was estimated to be worth ~£900 pa), so no doubt Richard was pleased with the acquisition too.

The church guide identifies one of the alabaster tombs as being that of Richard's son, the Prince of Wales known as Edward of Middleham, but this is by no means certain and it may well have been that of a child of the Neville family, but the tomb must have been very fine at its time of construction. 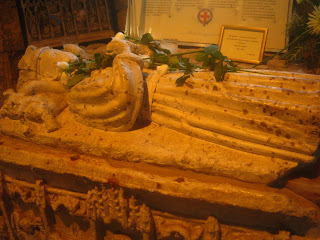 Other interesting sites in the church are the effigy of Sir Edward Thweng who died at Stirling in 1344, a carved face of a coroneted head thought to be symbolic of a Neville chantry and a beautiful stained glass 'sunne in splendour' - badge of the Plantagenets. We also manned the TBS stall for the afternoon - a few more pennies in the coffers! 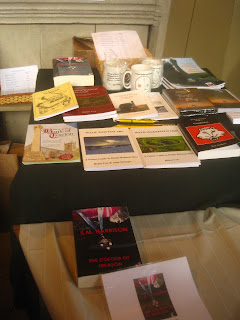 The church is open every day and tea and coffee are available - what more can you want? Sheriff Hutton castle is on private land but there is a circular walk that spans the perimeter - best when the leaves are gone from the trees.
Posted by Su_H at 02:45 No comments: