So - I haven't blogged in a while - due to lots of things; illness, accidents and just the sort of things life throws at you!


I do however have a new WIP. This features one of my fave characters from the BIG book (which is currently 'resting'). His name is Jack de Laverton and this WIP sees him ten years before his adventures with Elizabeth. I decided to try and discipline myself to write from one POV - Jack's - but already I've failed in that - it's just TOO restrictive for me and I couldn't resist getting back into Warwick's head ;-).

Anyway, Jack has landed himself at the Battle of Towton which from a research POV wasn't a problem; there are many books and as I am a member of the Towton Battlefield Society http://www.towton.org.uk/ there were plenty of people to ask, and as we re-enact the battle every Palm Sunday (Sunday 28th March 2010 if you want to come along) I could see how things were, including the lie of the land etc. But not so with Jack's next skirmish: The Siege of Carlisle.

After Towton the Lancastrians fled to Scotland to regroup their forces and to try and obtain help (men and money) from the Scots. As a bargaining tool Marguerite d'Anjou, King Henry VI's French wife, offered Berwick upon Tweed and Carlisle up to the Scots. Now Berwick might not have minded becoming Scottish and indeed changed hands several times until being finally liberated by Richard Duke of Gloucester in 1482, but Carlisle was not so keen. This left Marguerite no choice but to send in a force to leagure the city.

So - not much of a fight then for Jack to get stuck into?

John Gillingham gives it even less of a mention: '...news reached London - Carlisle had been relieved by Lord Montagu.'

As does Prof. Pollard: 'On the other side of the Pennines it was left to Lord Montagu to beat off an attempt on Carlisle.'

Maybe there's not much for Jack to do here then?

Philip Haigh makes it a little more interesting by having Marguerite herself leading the Scots and Lancastrian army (good conflict for the novel!): 'The citizens of Carlisle, however, were not as enthusiastic as Margaret to hand over the town, and she was obliged to lead a joint Scottish-Lancastrian army over the border in order to take it by force. Once Warwick learned of Margaret's advance he ordered Lord Montagu to march north and raise the siege on the town. Upon the arrival of Montagu's force the Scots withdrew across the border.'

But NO fight at all ?

So what is Jack going to do?

He'll have a lot more fighting if I listen to Cora L Scofield: 'But in a few days came the good news that Lord Montagu had raised the siege of Carlisle and killed six thousand Scots.'

What? He KILLED six thousand Scots? Well how many were there to start with? And how many men did John Neville have? - bearing in mind that he easily raised the siege! Or perhaps Sir John Neville was like Shakespeare's Hotspur and killed him some dozen Scots before a breakfast!

Prof. Hicks takes things even further: 'On 12th June an army of Lancastrians and Scots invaded the West March, burnt the suburbs of Carlisle, invested and took the city...Montagu allegedly killing 6,000 Scots.'

Hmmm - key word that - allegedly - but alleged by whom? Not one of these authors cites a reference for their 'facts' about the Siege of Carlisle - apart form Pollard who cites BOTH Ross and Scofield!

Just to put the killing of six thousand Scots into context. Estimates of the casualties at the Battle of Barnet - where Warwick was to die in 1471 - vary between one and half thousand and four thousand (Jones 2004) - and no one is denying Barnet was a battle! But Carlisle is just a siege isn't it? A siege that now has six thousand dead Scots plus no doubt some casualties amongst John Neville's men - no matter how easy it was - and Scots and Lancastrians burning and taking control of the city!

Maybe we should have a vote to decide?

2. Siege only but with Marguerite leading the Lancastrian army.

4. Siege and death of six thousand Scots plus the taking and burning of the city.

Haigh PA (1995) 'The Military Campaigns of the Wars of the Roses.' p70. Alan Sutton Publishing, Frome. 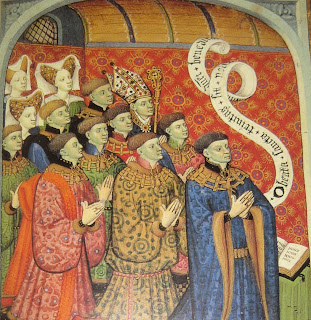 The Neville Family at Prayer from the Neville Book of Hours - maybe they want to know the answer too?